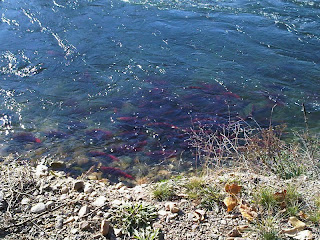 Just set up mobile blogger (unfortunately there's no Blogger app for Blackberry) and thought I'd give it a quick go while on my lunch break.

The topic of this post is "fish". As in the salmon run at the Adams River in the interior of BC. This year is apparently the largest, most impressive salmon run in decades, and it was well worth the trip I took up there last weekend. Many, many fish (both living and dead), and a nearly equal number of humans. Good to see people are still interested enough in nature to hike along a river bank littered with the decaying corpses of spent salmon.

I'll post some photos to Flickr when I get a chance. Until then, this single image I took with my BB will have to suffice!
Sent wirelessly from my BlackBerry device.