KTM X-BOW up to 600+ Units Production 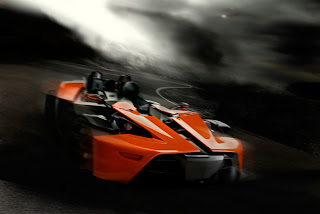 I've been a fan of the Austrian company KTM for quite a while. When I was a young gaffer, a family friend had a 500cc KTM dirtbike of which I was completely enamoured. I'm still a huge fan of their dirtbikes, and even the SuperDuke. When KTM announced the possible production of the RC8, their V-twin superbike, the combination of bright orange paint and a 990cc, 2-cylinder engine was enough to make me forget what the probable price-point would be.

KTM has now ventured away from the 2-wheeled realm, and into pure, unadulterated 4-wheel bliss. The X-BOW (or maybe X-Bow?) pictured above is a carbon-fibre-bodied, open-wheeled coupe which is most likely destined for not much more than rain-free track days. I picture a glorious world in which I have one of these parked in my garage, where I can select it for the daily commute. This dream of mine has come closer to reality, according to a recent article in Business Week. While the original production run was supposed to be no more than 100 units, KTM has received such support for the vehicle that they have firm orders for 600 cars, and plans to expand production to 1000 per annum.

The original price mentioned for the 100 units was around USD$55,000 (40,000 Euros), though actual MSRP is expected to be lower, given the higher number of units being produced. I can't think of any better way to spend $61,295CAD (as of today's dollar) than on this 300hp package of pure sex. There are more practical vehicles you could buy for that cost ... but who ever said practicality was a good thing?

image courtesy of Autoblog
Posted by Unknown at Tuesday, May 01, 2007