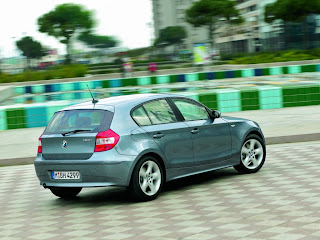 It was announced somewhat recently that BMW would be bringing the 1-series to North America as an '08 model. As both a fan of BMW's, and a fan of small cars, this excited me immensely. The 1-series, in it's hatchback form, is the perfect entry-level Bimmer. With a wide selection of engine options available (including the VW-killing 2.0L diesel) and (IMHO) beautiful body styling, it was a BMW that the young professional could purchase early in her/his career, and manage to feel sporty, classy and environmentally friendly all at once (plus still having room to carry her/his bike/groceries/hockey equipment/etc).

But then it all came crumbling down. The latest rumours around the proverbial water cooler have mentioned that us unworthy North Americans won't be getting a chance to purchase the 1-series hatchback. Originally, I hoped (but doubted) the diesel option would be available here. BMW currently doesn't have any diesel offerings, and Brian Jessel has mentioned that the company would be pursuing economical diesel engines instead of hybrids. A new car to the market would be the perfect opportunity to introduce a "new" engine technology in a USDM BMW.

To be perfectly honest, I see the 1-series, if offered in its current form, to be a niche vehicle. The BMW owners that I "know" either scrimp and save their middle-management wages to buy a 3-series (so they can appear more wealthy and important than they really are), or have enough money that they're buying higher-end vehicles (5's, 6's, 7's and M's). The 3-series consumer would see the 1 as a "step down" (i.e. they wouldn't look as "good" in it), whereas the high-end customer would have no reason to spend mid-$30's on a car.

Perhaps that's why BMW has decided to throw the 1-series into the market as a coupe/cabrio (see left). This car is being touted as a "pure driver's car", which means it will likely be stripped void of all options that I found enticing in the European-only 1-hatch (i.e. i-Drive). It's also been rumoured that the 1-coupe will receive no 4-cylinder engine options, but higher-performance V6's only (including the bi-turbo 3.5L mill which currently serves the 535i, and ever-so-sexy 335i). So essentially, BMW is taking away everything I love about the 1-series (styling, options, environmental appeal), and replacing it with a more "palatable" version for the semi-retarded North American (specifically USA) population. The same customers who complained that the M5 only came with DSG (with no option for a standard-shifting 6-speed), and then complained again when the 6-speed had traction issues (which is why it was never offered in the first place!!)

So what does this mean for the BMW consumer (current and potential)? Probably not much. Given my basic understanding of economics and price points, I predict the 1-coupe to be priced somewhere around the 320 (given the bigger engine, etc.) That being said, however ... it will be difficult for a salesperson to convince a customer that her/his moneys are better spent on a "lower number" car. Regardless ... price prediction (by me) is around the $40,000 mark (CDN). Given this, I'd (personally) rather spend a bit more and get a better looking (again, in my opinion) 328ci or 335ci. But: if the 1-series were priced properly (under $40k properly), I'd definitely consider purchasing one, simply for an entry to the "pure driving experience".
Posted by Unknown at Friday, April 27, 2007