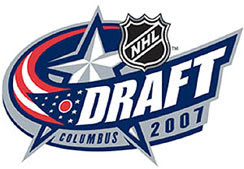 It's that time of year again. Central scouting has put forth their list of the predicted top picks in this year's NHL entry draft, and a few things have stuck out to me. Or at least stuck out enough for me to want to write about them.

Chicago has the #1 pick this year, thanks to the good ol' lottery, and CSN has listed Kyle Turris as the #1 choice. Turris (whom I've personally watched play in Burnaby, for the Express) is a high-scoring forward (66 goals in the BCHL this season), which fits perfectly in with what is required in Chicago. He will allegedly be playing next season with NCAA powerhouse Wisconsin, but I expect him to make a quick jump into the show (a la Jack Johnson). This is interesting to me for a couple reasons: firstly, as previously mentioned, is the fact that Turris is playing this season in Bby. Secondly, and more importantly to the rest of the hockey world, is the fact that Jonathan Toews (you may know him from previous WJC national teams) is also going to Chicago. Meaning that both of these young centers will end up in Blackhawks uniforms, which could be the answer to the woes of the windy city.

Phoenix, with pick #3, is allegedly looking to Keaton Ellerby to fill their gap in defense. Ellerby is currently playing with the Blazers (though he apparently wasn't good enough to help them get by PG), and has proved to be a physical presence in the WHL. He also happens to be a cousin of the captain of the Coyotes, Shane Doan. The downside of Keaton Ellerby is his size: he's a lanky 6'4", 185lbs. However, once Phoenix gets him onto a decent workout plan, he might help the Coyotes defend their ever-open net.

Lastly, Kamloops Minor Hockey product Casey Pierro-Zabotel has been listed as the #75 North American player (#87 overall), and has been officially invited to the NHL combine (the actual draft event, in Columbus). He's had a stellar year with the Merritt Centennials (yes, you read that right: he plays for Merritt), with 116 points in 55 games (3rd overall in the BCHL). Pierro-Zabotel has signed a letter of intent to play with Michigan Tech in the WCHA against my beloved Golden Gophers. Regardless of that fact, however, it's impressive to see a young player from Kamloops (who chose to play his junior hockey close to home) succeed.
Posted by Unknown at Thursday, April 26, 2007